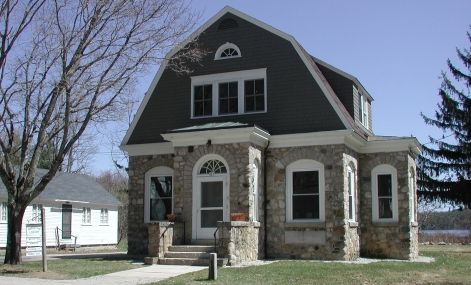 and all are welcome,

but MASKS STILL REQUIRED INSIDE

Friday Coffee Cafe' is temporarily outside,

In addition to great books and movies to borrow, plus 24/7 free curbside WiFi, exciting things are slowly resuming at the Waterford Library.

and all are welcome,

but MASKS STILL REQUIRED INSIDE

Friday Coffee Cafe' is temporarily outside,

In addition to great books and movies to borrow, plus 24/7 free curbside WiFi, exciting things are slowly resuming at the Waterford Library.

The Waterford library is committed to providing a focal point for reading, learning, and discovering, in a historical building with a warm friendly atmosphere, through a cooperative community effort.

Our circulation desk is staffed by

Are you passionate about what we're doing? Let us know! We're always looking for people  to help make our vision a reality, and will gladly help you find a way to volunteer that best suits your skills and interests.

We're excited to have you join us!

Whether you support the Library as a reader, visitor, volunteer, donor, attendee, or in any capacity -  thank you. Because of your participation, the Waterford Library thrives as a center for community, learning, internet access, and information sharing.

Prior to 1899, the Ladies Sewing Circle of Waterford carried on a lending library at the Knight store, run by Sarah and Carrie Knight. In 1899, the Circle incorporated as the Ladies Library Association of Waterford, electing Sarah Knight as its first librarian. Three years later, Mrs. Florence Rounds was elected assistant librarian. Interest in the library grew and more room was needed for books. The Knight sisters began construction of a stone building on the front of their lot, but both died only a few weeks apart in August 1911. In 1912 the old association turned its property over to the newly formed Waterford Library Association. Mrs. Rounds was chosen as new librarian and she appointed Miss Charlotte Morse (Fillebrown) as assistant librarian.


On Oct. 1, 1937 a fire destroyed the Knight Store, part of the library and other nearby buildings. Renovations to the library were made in early 1938. The association received the deed to the land where the store had been, a gift from Albert Rice, Mabel Gage and Dr. Bishop. That land now houses the Rice Museum, moved from Rice Hill to the site in 1978.


In South Waterford, the Bear Mountain Library Association was started in 1928, along with the Community Club, which supported the library for 48 years. The Library was moved to the first floor of the home of Flora Hamlin Abbott, a great benefactor of the library along with her sister, Alice Hamlin Warren. On September 30, 1994, the Bear Mountain Library merged with the Waterford Library in the Flat. The consolidation leaves the town with one library serving all Waterford residents.


The library is a Colonial Revival style building designed by noted Portland architect John Calvin Stevens and his son John Howard Stevens. This firm was also responsible for the rebuilding of the second story after the 1937 fire. The library is part of the Waterford Flat Historic District.

This year we received a grant from Northern Forest, the King Foundation, and Maine Community Foundation to update our internet access WiFi, and add two new Dell Laptops, and a new Brother Printer to out library. We are most grateful for this gift, that also included Microsoft Office and Adobe programs to help visitors with writing and publishing.